The 4th of July, an Inspirational Quilt and a Quiet thought 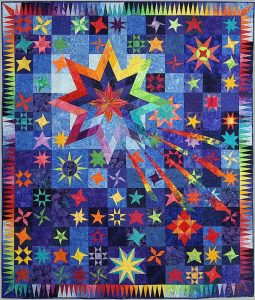 A Quieter 4th of July

The three day weekend is drawing to a close. Lots of fireworks and barbecues. Last night was the big show for us. The Country Club, which is close, always puts on a big fireworks extravaganza . We go out on the patio, get comfortable chairs, cool drinks and really have front row seats to a fabulous show.

Steve and I felt the mood to be a little more somber this year. It was the first 4th without my Mom. It was just two chairs this year. And none of that delicious food Mom would have insisted we have.

I always put the dogs in the bedroom where they feel safe from all the loud noises. They don’t outright panic, but they are much calmer tucked away in their beds. The cats have never paid a lot of attention to all the happenings. I always make sure they are in the house where they too can feel safe from all the noise. Somehow, this year, we were not paying enough attention because our one cat slipped out the door before the fireworks show. Mew, the cat, was a stray/feral cat that was living in Moms garage when the girls and I moved in. For the most part I can now keep her as an indoor cat, but she does like to race out the door occasionally to have her outside adventure time. She always comes home before bed. That is when we give the two cats a special treat before everyone goes to bed.

We were all set to assume our positions on the patio, when I realized Mew was not in the house. In fact the,first loud booms had begun. Steve being far calmer than me says he is quite sure Mew will find a place to hide during the show and will come home when it is quiet again. The booms just kept get louder and louder and I think of poor Mew, totally overwhelmed, hiding someplace. So instead of sitting in our comfortable chairs, enjoying the show, we were both creeping around the yard calling for Mew. Flashlights, pajamas and bathrobes, Steve and I creep everywhere we can think of. Steve kept telling me,she would be fine, cats are smart, etc. etc.. I said, let’s keep looking. At some point I realized that our sprinkler system was going to start up. We could get drenched and Mew was not going to appear if they were on. We started to head back in the house. No, Mew, and we were a bit wet from the sprinklers. The fireworks show ended. Exhausted, I think it is time for bed. I will leave all the outside lights on so Mew will know how to get in. A few minutes before we turn out the lights in the main house, I hear Mew’s distinctive, I am here and I am not happy, meow! I could see her silhouette through the window. Angry, and a bit wet too she ran in the front door. But, she was home, safe. Today, which is officially the 4th, she has made no attempts to run past us to get outside.

I read an article on Facebook about a town that had invested in “noiseless fireworks”. What a marvelous invention. It was done so as not to cause so much stress on animals and I am sure people too, who might suffer from something like PTSD. I had not paid much attention to how loud the booms were until I was prowling around, flashlight in hand, trying to avoid the sprinklers. Or maybe it was I, knowing Mew was huddled somewhere thinking the world had gone mad.

We all love the 4th of July. Our Independence Day. The recognitions of what a wonderful and blessed country we live in. The barbecues, laughter and fellowship.

My sincere hope is that the quieter fireworks become the rage. We can sit in our lawn chairs, sipping our drinks and watch the light shows. Quieter, yes definitely would be nice.